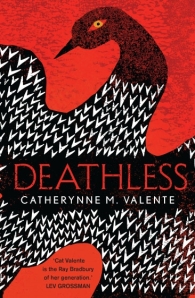 A handsome young man arrives in St Petersburg at the house of Marya Morevna. He is Koschei, the Tsar of Life, and he is Marya’s fate. For years she follows him in love and in war, and bears the scars. But eventually Marya returns to her birthplace – only to discover a starveling city, haunted by death. Deathless is a fierce story of life and death, love and power, old memories, deep myth and dark magic, set against the history of Russia in the twentieth century. It is, quite simply, unforgettable.

I have been sat on this review for a while. I wasn’t quite sure how to put how much I loved this book into words. I think the best way is to tell you that after I finished reading it, I bought it for my best friend. I not only wanted her to read it, I wanted her to own it. And now she does.

Catherynne M. Valente has steadily grown to be my favourite author alongside Neil Gaiman and it is in a big way because of this book (as well as her Fairyland series and Palimpsest). Valente is a poet, her work is always very lyrical and inspiring. It is as much her use of language as the stories she tells that makes me love her work so much. It’s so rich and fulfilling, it’s very hard not to feel satisfied while reading her work.

Deathless tells the tale of Marya Morevna, a figure from Russian folklore, and Koschei the Deathless. I love folklore and it is clear that Valente does too, she weaves it together in a way which seems completely natural. Without prior knowledge of Russian mythology, it might take some Googling in some places where Russian terms aren’t explained but it is well worth it.

Valente employs repetition, as you might find in old fairy tales, to great effect. My favourite parts of the novel were those which were familiar. It really added to the magic of the novel. Again, she is very poetic and it’s incredibly satisfying.

The characters were compelling and while I didn’t always like them, I always cared about them. It’s hard to choose a favourite but I did particularly enjoy the domovoye (which, as I do not have the book on me, I may have spelt wrong). It has quite a large cast but that is not to the book’s detriment, in fact, it’s something I really enjoyed about it. I liked getting to know all of the different characters and creatures even if they did hurt my heart.

This book tugged at my heart and is still tugging even though it’s been a while since I finished reading it. I would definitely recommend buying it. It currently lives beside my bed and I don’t see it moving any time soon.