Hello The Internet. How are you? I disappeared again. Sorry about that. I should rename this website, call it something like The Official Apologies of Elou Carroll RE: Her Absence from Blogging. But I won’t.

Really though, I meant to do some blogging last week but I was so thrilled to have time off work to do absolutely nothing that I did just that. Absolutely nothing. Aside from my draw-everyday-of-2016 project which is still going strong, though I may not have mentioned it here before now.

It was refreshing, doing nothing. My absence from my blog has most notably been caused by late nights at work, which are self-inflicted but necessary. It is from one of those late nights that I am making my return. I’m about to leave, really I am, but once I get home I will not be using a computer. There is my dilemma. There it has been for the last month or two. So tonight, as I am here and as I am done for the night, I decided to write a little post before I leave. It is one of the better impulsive things I have done while alone in the office after staying late most evenings (the most impulsive yet: cutting my hair – not the most traditional use of the office bathroom but it felt necessary).

Actually, ignore those brackets. I am going to talk about that bit. Non-bracketed. I cut my hair at half past seven one evening, in the ground floor bathroom of my office. I’ve cut my hair before, the act of cutting it is not that unusual, but my choice of make-shift salon was quite unexpected.

Picture this: March 23rd, the Wednesday before the Easter bank holiday, an Elou, alone in an office with a desk stacked high with books and papers (my desk is potentially the most cluttered of the whole company, I’m a creative, what can I say?). The constant thrum of electricity which is almost inaudible when the whole company is around but emerges from its hiding spots in the evening when everyone leaves, an InDesign document which refuses to cooperate and a small mound of print orders which need doing and typesetting which needs sending out before the aforementioned Elou leaves the office the next day, not to return for just over a week. The InDesign document has a life of its own and doesn’t want to be fixed. In its own mind it’s not broken in the first place (and it’s not, not really, it’s just acting a little strange but at half seven in the evening, a little strange often translates as broken). Biblio (“a fully integrated best of breed publishing system accessible online from any PC and Mac connected to the Internet”) is eking out print order PDFs as slowly as it possibly can, while time seems to have sped up to at least double its normal pace. The afore-aforementioned Elou notices the straggly ends of her hair, which has not been cut since … June? She needs to fix something, nothing appears to be going right and she needs to. To grasp a teeny, tiny pixel of control. So she does.

She sees the scissors on her desk, not quite sharp enough for what she needs to do but she knows there are hair cutting scissors at home to tidy everything up, and she hops, skips and jumps into the bathroom (no, really).

Writing about myself in the third person is also quite liberating. I realise now, when I’ve had a week and a bit to sit and think about it, that this might have been a little bout of madness. But sometimes madness is necessary. Sometimes, all you need is to chop off four inches of hair and the world will look a little better. 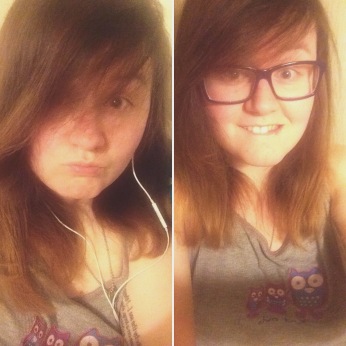 Taken from Snapchat, to Instagram, with silly selfie expressions which I am not even a little bit ashamed of. My hair was long before. So, so long.

(And so will your hair, so much so that your boss will mention it the next day, to be met with a colleague asking-but-not-really-asking-because-they-already-know-the-answer Where did you get it done, Emma? and your shifty response of here, and when asked to elaborate right here, in the bathroom. A pause, which is met with awkward shifting on your part, but is finished with amusement from your boss who has just about gotten used to the odd things that happen around you on a near-daily basis after working with you for two and a half years. Phew.)